What is the difference between a remake and remaster?

Well a remaster is basically taking an old game and improving the graphics and the way it performs while a remake is technically creating a brand new game from the bottom up using the original game as a blueprint for this.

A remake is not a reboot, a reboot is when you create a game with ties to the same universe, however it usually feels like a new game without copying the exact original design entirely.

Now I’m not going to get too technical with all the different nomenclature surrounding this topic, but I got to say there have been a lot of remakes and remasters these past couple years in gaming and I thought it would be neat to share some games I want to see remade. I’m going to go over 7 games in total (5 games + 2 honorable mentions!).

I feel like this game wouldn’t be a very popular choice, but I think it deserves a remake for how fun it was. It was a Motocross game for the PS2 where you could race your friends whilst performing awesome stunts and tricks or you could freestyle and see who could get the highest amount of points and you could break through panes of glass and go through rings of fires.

In a way it kind of reminded me of Tony Hawks Underground, but a Motocross version with motor bikes. I can only imagine how fun it would be to play now with updated graphics and online with other players. Plus it had great in game soundtracks! 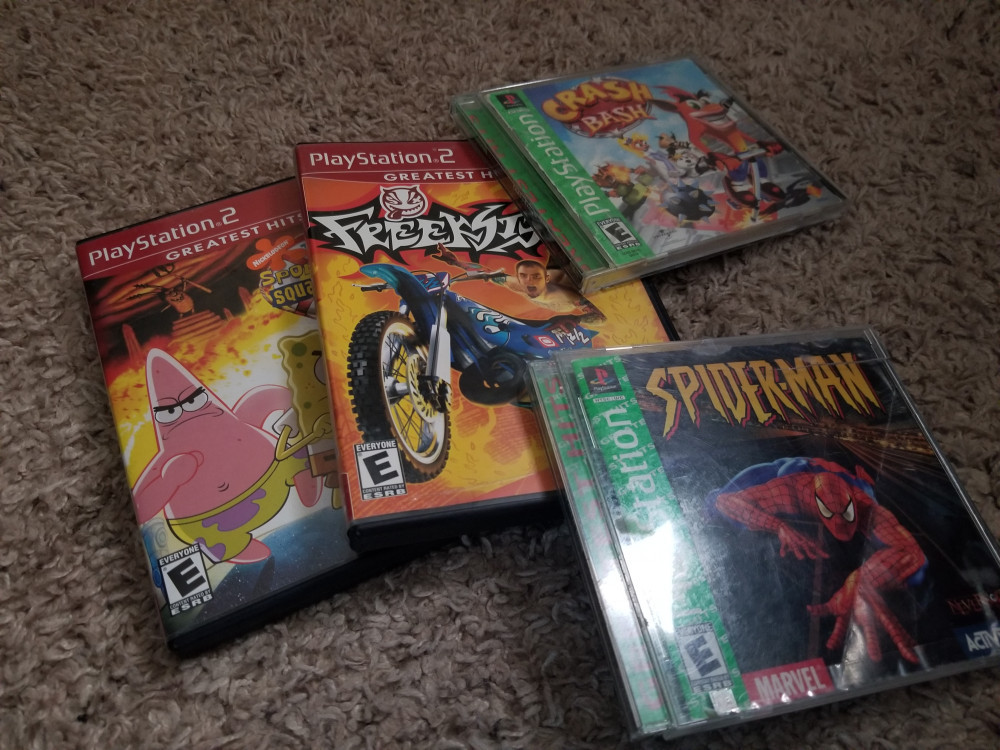 This was a really good game on the PS2 and if Spongebob BFBB is getting a remake then I think they need to go all out and remake The Spongebob Squarepants Movie Game as well too sometime.

I just know I’m going to get a lot of love and hate for this, but I would love to see Crash Bash get remade. I think this was the most difficult Crash game I’ve ever played.

The AI in this game are so unfair and will use their full power to stop you from winning. They will literally send secret telepathic messages to each other and act as a terminator to ensure you are absolutely and utterly destroyed with no escape.

It was definitely a fun party style game though to play with family and friends and would love to see this game remade with an online mode like Crash Team Racing: Nitro Fueled.

It was a hard game I never fully completed, but I loved the challenges in it. Especially the crystal challenges where the level was modified in some odd way to make it different.

Number 2 – Spiderman For the PS1

Yes, I know… A spiderman game on the PS4 already came out and I already played it and it was an amazing game, however I also want to see a remake for Spiderman on the PS1 too.

There are so many great villains in this game like Carnage, Doctor Octopus, Mysterio, and anti-heros like Venom and the Punisher (although the Punisher just makes an appearance for some brief cut scenes).

The game is full of surprises and quirks like the “What If?” Game mode where you’ll see a fish swimming in Mysterios head as he tries to fight Spiderman.

There are also a lot of fun easter eggs in the game itself and you’ll see Spiderman interacting with a lot of heros too like Captain America, Daredevil, the and the Human Torch.

You can also unlock several different costumes with different abilities, like infinite web, the ability to turn invisible, etc.

Sadly, parts of the game are narrated by Stan Lee, so I wouldn’t know how they would get to do his voice if they remade the game, unless they recycled his voice from the original game itself or used some old recordings perhaps…

Or even if they used a type of voice cloning software with AI to mimic his voice.

Now this ones a classic. You get to play as James Bond and drive cars armed with the ability to take down military tanks, helicopters and race through the levels stopping various enemies along the way.

You get to drive the Aston Martin DB5 and a couple other different cars packed full of super cool gadgets and abilities through cities, jungles, and secret bases.

This game would definitely make an excellent remake!

The older games like Tony Hawk’s Underground had good level design and they were always so laid back and fun to play.

I loved the creativity, the challenges and tricks you could do and the feeling of freedom in the game.

Instead of rebooting Tony Hawk games, I think it would be better idea just to do a good remaster or even a remake of some of their older games (games they made before 2006) so people who love them can experience them again on the PS4, PC or whatever.

I’ll be honest, I never got to ever fully play Crash Twinsanity, however the couple of times I remember doing it with friends, it was a really enjoyable experience and I want to see this game remade so I can get the full experience out of it.

Although there are aspects of remakes that I sometimes don’t like, I got to say for the most part that I like them and would like to see a couple more games I enjoyed in the past remade.

Are you excited for the new crash bandicoot game coming out this year, how about the new Spongebob: Battle For Bikini Bottom – Rehydrated?

I don’t know how the new Crash game is going to turn out, but I’m excited to see what it will be like. What are your thoughts on the games I want to see remade?

Do you have any personal games you would like to see remade? Do you like reboots, remasters, or remakes more? Or do you not care about all the different terms and just want to play a good game? Let me know what you think and happy gaming!